History professor to discuss women’s experiences on the California Trail 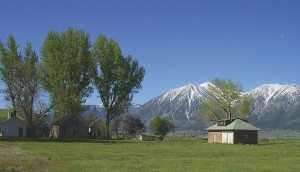 Dwyer’s presentation is based on the diaries, memoirs and reminiscences of pioneer women and men who traveled westward from the 1840s through the 1860s. These accounts, which pay special attention to the landscape, Native Americans and the danger and promise of the journey, provide a vivid account of pioneer life and illustrate how women pioneers often formed the backbone and inspiration for the long, arduous western journeys of nineteenth century emigrants.

Dwyer is a professor of history at Western Nevada College whose research focuses on women pioneers of the nineteenth century American west. She is also nationally known for her chautauqua portrayals of remarkable women from this period. Her appearance is supported by the Nevada Humanities Committee, the National Endowment for the Humanities and NV Energy.

This free outdoor program is part of a speaker series offered by Nevada State Parks at the Dangberg Home Ranch Historic Park. Chairs and shade shelters are provided by the park. Visitors are welcome to bring lawn chairs and encouraged to bring drinking water.

Dangberg Home Ranch Historic Park, located just west of Minden in Douglas County at 1450 Highway 88, features several historic buildings constructed between 1857 and 1920, including what was once one of the most prominent homes in Carson Valley. The site was settled in 1857 by Carson Valley pioneer Heinrich F. Dangberg Sr.

Five events to check out: Is brunching a sport?

Five things to do this week: Omicron rising edition

Nevada governor: No masks at events that require vaccines