Development in the public eye (video) 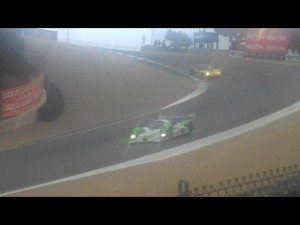 Another October, time for me and my brother Steve to make our annual pilgrimage to Laguna Seca Raceway for the American Le Mans Series (ALMS) 4 hour endurance race in Monterrey, California. The series usually features 4 classes of cars, 2 prototype (experimental) and 2 production (street cars). Recently they added a 5Th, the Michelin Green X Challenge.

All of the Green X cars run on bio fuel and are the most experimental of the prototypes. The one that I was most impressed with was the Dyson Lola/Mazda turbo-diesel hybrid.

Dyson Racing started as a father/son team over 25 years ago and has been a major independent in the ALMS since 1999. The father is now retired. They run 2 cars but the white and green #16 caught my eye at the 2 hour mark, when we were sitting in turn 4. He was going nose to tail with eventual winner Gil De Ferran in his more powerful Jim Hall Acura. De Ferran should have been losing him in the straights, but wasn’t. At about 2 1/2 hours into the race, the Dyson team had a lengthy pit stop which put them out of the top ten.

We arrived early, in time for the morning warm-ups and spent some time wandering around in the pits. I didn’t shoot a lot of video as I wanted to save the battery for the race. One shot I couldn’t pass up was a close-up of De Ferran checking the seating arrangements in his Acura. Another shot was an exhibit of vintage Jim Hall Chevy Chaparrals from the old Can-Am series. There were a lot of exhibits explaining some of the new technologies, and of course, the inevitable t-shirt booths and $3 hot dogs too.

Shooting video of auto racing is not easy. I was battling fences all day long. There were some holes in the fence to shoot through, but these were always crowded with photographers. The hilly terrain sometimes helped. One guy I saw was carrying a small aluminum step stool and shooting over the fence. Great idea, I’ll have to remember that for next time.

We watched the start of the race at turn 2, the fastest part of the track. After about an hour we moved to turn 6, then to turn 4. We stopped by turn 10 on our way to the “corkscrew”, a series of corners starting with a 90 degree left hander, then a 90 degree right hander and a sweeping left hander all happening in a 3 story drop in elevation. We finished up back at turn 2. It was a great day, and a great race.

From The Right: We Don’t Care How You Did it...