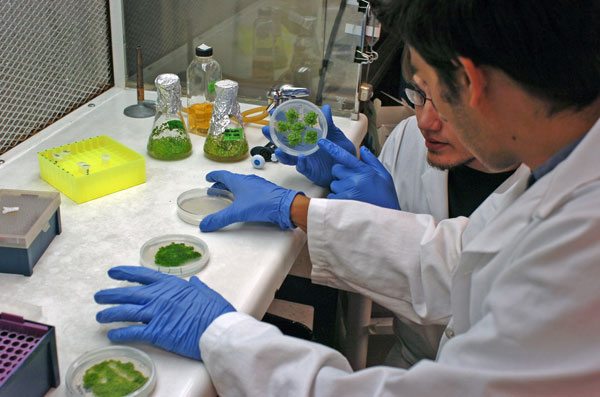 A team of a dozen undergraduate students at the University of Nevada, Reno spent their summer working to transform the genes that synthesize cinnamon oil into plants that can then be used as an eco-friendly mosquito killer.

Their project will be in competition with projects from 120 teams worldwide at the annual International Genetically Engineered Machine competition at the Massachusetts Institute of Technology. The event from Oct. 30 to Nov. 2 is the premiere undergraduate synthetic biology competition.

Synthetic biology is a new area of biological research that combines science and engineering in order to design and build novel biological functions and systems. This is the first team from Nevada to participate in the five-year-old competition that includes schools such as Harvard, Stanford, MIT and U.C. Berkeley.

For its first venture into this new realm of research, the University team chose to engineer a product of cinnamon oil into duckweed, a small aquatic plant that is a source of food for mosquito larvae.

“Our goal is to transform the genes that produce cinnamaldehyde (cinnamon oil) so it can be used to control mosquito populations, without using chemically synthesized, potentially harmful pesticides,” Janice Cho, the creator of the idea said. “More than one million people die in the world due to mosquito-transmitted diseases. The introduction of this new duckweed into mosquito prone areas could make a big difference.”

Independent of classwork, the biochemistry students, lead by students Cho and Nick Tschernia, have been using a lab in the department of biochemistry to prepare for the competition. The group has been successful in creating a novel genetic pathway into E.coli, as required for the IGEM event, and is in the process of increasing the gene expression within duckweed.

“The students have done a lot of hands-on lab work using the “molecular biology toolbox”, faculty advisor David Shintani said. “It’s like a DNA erector set, like having a box of gene parts. There are various pieces you need to put together in the right order to get them to work. It’s a lot of trial and error, but it’s not random. Placing them correctly is based on scientific principles.”

While some of the students are using the project in their senior thesis, others are participating just for fun.

“This is especially enjoyable because we are able to use our own ideas with guidance from extremely talented faculty.” Tschernia said. “There aren’t many universities where undergrads can do this type of creative and independent research. We’re grateful for the huge amount of support we’ve received, without it this wouldn’t be possible.”

The team has received support from the biochemistry department, the College of Agriculture, Biotechnology and Natural Resources, the Nevada IDeA Network of Biomedical Research Excellence Program and the VP of Research’s office.

“Many of the private universities we compete against fund their participation in this competition with endowments,” Tschernia said. “We want to show that we, as a public university, can compete on the same level.”

The students are looking for donations to help defray costs of the project and competition. They recently set up a table at the University Farms Field Day and sold root beer floats to raise money.