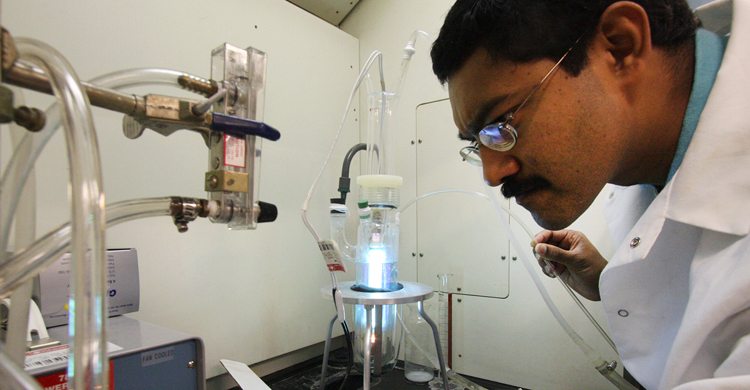 Growing algae for fuel, building artificial skin with nanomaterials, mimicking the creation of high temperature plasma around black holes and figuring out how to make large concrete structures safer during earthquakes are just a few well-known research projects under way at the University of Nevada, Reno.

In its fall 2009 publication, the University Office of Research announced funding of $73 million for research in fiscal year 2008-09, more than double the $34 million the University received in 1999.

“Research is central to the University’s mission,” said Marc Johnson, executive vice president and provost at the University, Nevada’s land-grant educational institution since 1874.

“The diversity and breadth of our research speaks to our accomplishments as a dynamic research institution,” Marsha Read, interim vice president for research, said. “A number of our faculty have been recognized for their excellence and creativity in the research arena. These are important factors in recruiting and retaining high-caliber faculty and excellent graduate and undergraduate students.”

The University’s research program is also key to helping the state’s economy and preparing students to compete in an increasingly competitive knowledge-based world economy, Johnson said.

“Trainees, from undergraduate freshmen to postdoctoral fellows, benefit from our status as a major research university. These objective data from the annual report clearly show that the University is highly competitive at a national level.”

“Our research portfolio is important to our state’s major industries, such as mining, geological and earth resource industries, a wide range of engineering businesses and gaming,” he said. “It’s also important in creating the industries of tomorrow such as renewable energy, which is enjoying a renewed period of growth.”

A strong research program can also become self-generating for both the University and the economy.

“Look at our new Center for Molecular Medicine that will open in fall 2010,” Johnson said. “It’s funded in large part through the work of University researchers, will further advance our research profile and has the potential to spawn new industry which will contribute to the economy.”

One of the University’s most prolific researchers, Tom Kozel, a professor in the University of Nevada School of Medicine’s Department of Microbiology and Immunology, is just one example of the depth of research done at the University. Among several grants from the National Institutes of Health, his ongoing 31-year grant to study opportunistic infections is one of the longest running NIH awards in the nation. He is a national subject-matter expert in his area of health care interest: microbial pathogenesis.

“The size and success of the research enterprise at the University is a key component of the educational program for students at all levels,” Kozel said. “Trainees, from undergraduate freshmen to postdoctoral fellows, benefit from our status as a major research university. These objective data from the annual report clearly show that the University is highly competitive at a national level.”