Home > Entertainment > Arts > Tapestry of Tunes: An evening of song and dance from the Sierra Nevada Balalaika Orchestra Oct. 3
ArtsEntertainmentMusic

Tapestry of Tunes: An evening of song and dance from the Sierra Nevada Balalaika Orchestra Oct. 3 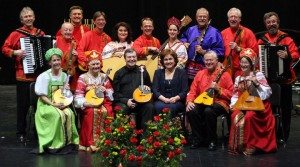 One-of-a-kind Performance with Special Guest Vocalist, Steven Murdoch, and Performances by the Barvinok Ensemble, the “Hora” Roumanian Ensemble and the “Kalyna“Ukrainian Dance Ensemble

Music and dance lovers will have the chance to indulge in a never-seen before lively medley of Eastern European and Russian vocal and dance performances at the Sierra Nevada Balalaika Orchestra’s Tapestry of Tunes concert on Saturday, October 3rd. The concert will take place at 7PM at Damonte Ranch High School in South Reno.

Special guest vocalist and well-known Nevada Opera Tenor, Steven Murdoch, will perform traditional Russian and Ukrainian numbers along with the Orchestra. Additionally, attendees will be treated to performances by the Barvinok Ensemble with Nina and Zhenya Tritenichenko; the “Hora” Roumanian Ensemble with Nicolai Prisacar and the Ukrainian Dance Ensemble “Kalyna“ with George Arabagi and Irina Arabagi.

The Barvinok Ensemble will bring together dynamic husband and wife duo from the Ukraine, Nina Tritenichenko and Zhenya Tritenichenko. Nina, a professional bayan (chromatic accordion) player, vocalist and music arranger and Zhenya who plays the guitar, sopilka (Ukrainian wooden flute) and snare drum, and also sings baritone in vocal numbers. The Ukrainian Dance Ensemble “Kalyna” is made up of enthusiastic dancers, ranging from 13 – 16 years of age, all originating from different parts of the Ukraine. The dancers are led by award-winning professional dancers George and Irina Arabagi, formerly principal dancers with the Moldavian State Academic Dance Company “Joc,” where they toured more than 25 countries around the world.

Tickets are $20 at the door and $15 advance purchase from Maytan Music Center, Sundance Bookstore, Pet Vets or the Sierra Nevada Balalaika Society.

About the Sierra Nevada Balalaika Society

The Sierra Nevada Balalaika Society is dedicated to the perpetuation of music written for the balalaika, domra, and related instruments. Its goal is to preserve the musical and cultural heritage of Eastern Europe, while educating the youth and community to the magnificence of a distinctive culture. The Sierra Nevada Balalaika Society is based in Reno, Nevada, and is an affiliate of the Balalaika and Domra Association of America. It is a 501(c)3 non-profit tax-exempt corporation in Nevada.