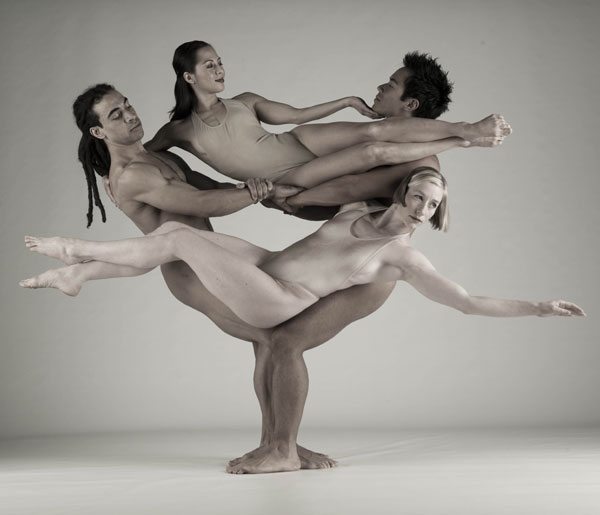 “The choreographers and dancers that come together to create a Pilobolus performance translate dance into a completely different language providing audiences a unique entertainment experience they won’t soon forget,” Beth Macmillan, Artown executive director, said. “Artown continues to receive positive comments from audience members that attended our sell-out performance in 2005 and the anticipation for the November show is high. We’re thrilled that the dance audience in our community embraces such inventive movement and performance style.”

Pilobolus has broken boundaries in dance by departing from traditional movements in favor of its own exploratory style, derived through intense periods of improvisation and creative play. Merging wit and playfulness with athleticism and grace, Pilobolus creates fiercely modern performances that are engaging on a visual as well as emotional level and convey an inspirational sense of harmony. Dancers create shapes and forms with their bodies in a collaborative, and at times provocative, series of poses and movements that challenge the imagination. Twisted and entwined at one moment, gracefully balanced and fluid the next, Pilobolus’ dancers push their physical bounds to create the unexpected.

Founded in 1971 by three Dartmouth University students, Pilobolus has grown from a company operating outside of the traditional dance realm into a powerhouse in the dance community with more than 100 choreographic works and a lengthy list of credits. The company’s works appear in the repertories of major dance companies including the Joffrey, Feld, Arizona and Aspen Santa Fe ballets in the U.S. as well as Italy’s Verona Ballet and the Ballet du Rhin in France. Still evolving after 38 years, Pilobolus bridges pop culture and the cultural arts in an unforgettable way as is evidenced by their shadow figures seen in a variety of ads for companies such as Hyundai and television programs including the 2007 Academy Awards.

A monthlong arts and culture festival held each July in Reno, Artown presents Pilobolus as part of a post-season series of performances. Additional Artown post-season performances including Paddy Moloney with The Chieftains and special guest Oct. 2 and Itzhak Perlman with pianist Rohan De Silva Jan. 21, 2010.

For more information on Artown, visit www.RenoIsArtown.com or call the office at 775-322-1538.

Consisting of more than 400 events each July, Artown was noted by the National Endowment for the Arts as one of the most comprehensive art festivals in the country. With more than 100 partners, the month-long festival takes place at venues citywide. Artown receives major funding from the City of Reno, is sponsored by Harrah’s Reno, International Game Technology, KOLO 8 News Now, KTHX-FM, NV Energy, Reno Gazette-Journal, Reno-Tahoe and U.S. Bank with additional support from the Nevada Arts Council and the National Endowment for the Arts.