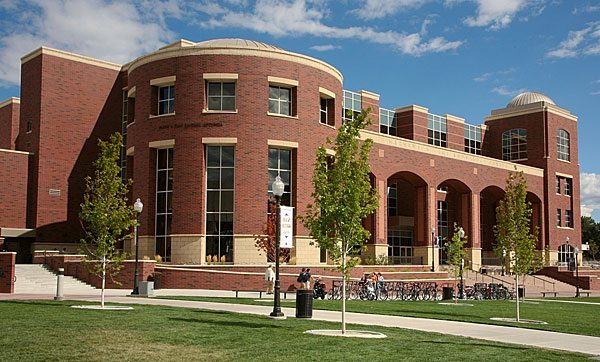 The 300,000-square-foot facility contains more than 1 million volumes, with the capacity to hold 2 million. The judges for the PRO AV Spotlight Awards were particularly impressed with the Center’s all-fiber high-definition (HD) distribution system.

“I believe that of all the library-type structures built in the last 20 years in the country, this one becomes the exemplar.”

The system allows for high-quality audiovisual transmission and use throughout the building, including in the 168-seat Wells Fargo Auditorium that features surround-sound, three-screen HD projection, and video capture and streaming. There is also the Digital Studio Classroom where table microphones auto-steer Sony HD cameras, an Orion nine-monitor video-wall and two HD videoconferencing suites.

Besides the “education” category, the PRO AV Spotlight Awards included recognition of corporations, health-care providers, museums, government, churches and others. The judges stated that the education category was the most competitive of all, but that they chose Nevada’s and Temple’s projects based on their demonstrated innovation, collaboration and appreciable return on investment.

Pro AV stated of all their award winners, “They’re the result of successful coordination among AV integrator, consultant, architect, end-user, and other parties. And they demonstrably enhance the lives, businesses, education, spirituality, and enjoyment of the winners’ clients and their clients’ clients.”

Noting that the Knowledge Center was the University’s most ambitious construction project in its century-plus history, Zink said that it is indeed designed to be a resource for the entire community, not just the University.

“This Center is poised to be the intellectual nexus of the region,” he commented. “In its first year of operation, it has indeed become a place of “high-touch,” as well as high-tech. It has established itself as a gathering place, cultural events center and resource for the community, as well as the information and technology center for our students.”

Zink said that it is very difficult to describe the Center’s capabilities, commenting, “You really need to come see it. People are awestruck with its capabilities, technology, comfort and architecture.”

Zink said he is grateful to Charles Mathewson, International Game Technology and other donors who contributed $22 million of the $75 million that built the Center, which opened last August. He encourages visitors to the Center to arrange a free guided tour by contacting Maggie Ressel, 775-682-5653 or [email protected] Self-guided tour brochures are also available at the Center’s information kiosk.