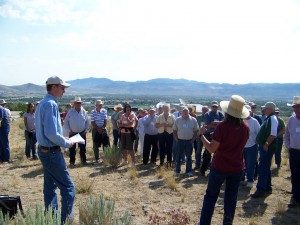 On Sept. 4, members of the Grazing Lands Conservation Initiative (GLCI) steering committee and Nevada partners, 79 in all, toured western Nevada to learn about western ranching. The tour was in preparation for the 4th National Conference on Grazing Lands (4NCGL) that is being held in Reno, Dec. 13-16.

“First we showed them some of the challenges facing western ranchers, such as grazing on public lands and damage from wildfires, then we showed them how ranchers are adapting to survive and maintain their way of life,” said Bruce Petersen, state conservationist for the Natural Resources Conservation Service in Nevada.

The first stop was a public grazing allotment on the outskirts of Carson City. Sheep ranchers Ted Borda and Joe Echenique explained the difficulties of grazing in close proximity to urban areas and the impacts on the range from drought. Ed Smith, an educator with Nevada Cooperative Extension, and John McLain, principal with Resource Concepts, Inc., talked about efforts to reduce fuel loads and prevent wildfires using sheep. Ann Bollinger, resource specialist with Carson City, and Jim Gifford, NRCS district conservationist, discussed efforts to restore the watershed after the devastating Waterfall Fire in 2006.

Guests were treated to a Basque lunch at the historic JT Restaurant in Gardnerville, and, after a greeting from Nevada Governor Gibbons’ Deputy Chief of Staff Lynn Hettrick, learned more about the challenges of western grazing from Nevada Cattlemen’s Assoc. President Dan Gralian. “Over 700,000 acres burned in Elko County in 2007,” he said. Joe Guild, Vice-Chair, National Cattlemen’s Beef Assoc. Federal Lands Committee, talked about the large percentage of public land in Nevada compared to private land. “If the sage grouse is listed as a protected species, western ranching will be history,” said Guild.

The afternoon focused on diversification. The tour group visited the Corley Ranch, a working cattle and hay ranch that hosts farm festivals, a corn maze, a pumpkin patch with personalized pumpkins and other agri-tourism events. James Settelmeyer, Nevada Assemblyman and Chairman of the Carson Valley Conservation District, talked about public land grazing and legislation affecting agricultural producers. The group then visited Ranch No. 1 in Genoa, the first ranch staked in Nevada, to learn how the Lekumberry family is marketing their beef at their outlet store, Trimmer Outpost, and local restaurants and grocery stores.

The tour was sponsored by the California GLCI Committee, California Assoc. of Resource Conservation Districts and the Nevada NRCS.

For more information on the GLCI and the upcoming conference, visit glci.org.