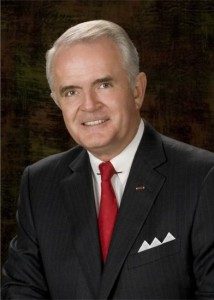 Governor Gibbons noted that the national and state economic crises mean particular attention needs to be paid to criminals committing fraud against business and government programs.

“Whether it is mortgage fraud, Medicaid fraud, or another type of scheme, everyone is working with tighter budgets and if crooks want to profit from fraud, I want them stopped and brought to swift justice,” Gibbons said. Gibbons noted that state investigators are already looking into a major mortgage fraud case in Nevada, but further details cannot be disclosed at this time. “If people are illegally profiting from the misfortune of others or at the expense of others, I want it stopped.” Gibbons added, “Honest law-abiding citizens and people in government need to work together fight crime.”

Governor Gibbons says the Nevada Crime Commission will be composed of law enforcement officers from all levels of government in Nevada, as well as state and local prosecutors, business leaders, community leaders and activists, representatives of crime victims groups, and others. Governor Gibbons says he will invite federal agencies like the FBI, ATF, U.S. Attorney’s Office and the U.S. Citizenship and Immigration Services to participate.

Governor Gibbons plans to give the Commission the flexibility to create task forces for certain crime problems or crime problems in certain communities. The Governor also wants the commission to have the authority to seek funding sources and grants, as well as suggest changes to Nevada laws. “I want this commission to look at present day crime trends and suggest realistic solutions,” Gibbons said.

Governor Gibbons plans to seek members for the commission immediately.