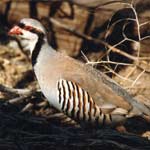 The 2009 Chukar Forecast holds good news for those who like to hunt Nevada’s favored upland game species. This season will be better than the previous two years and will provide sportsmen with ample numbers of young birds. The Nevada Department of Wildlife (NDOW) recently posted the full forecast at ndow.org.

The report references aerial surveys, which point to a 2009-10 chukar hunting season that should be good for most of Nevada with some areas providing excellent hunting. Coveys comprised mostly of young birds will allow the hunter to approach within shotgun range for at least the first half of the season. Hunters across the state should enjoy good success early if conditions remain dry through October. As the season progresses, hunters will still have to spend a fair amount of time on foot pursuing the species.

Look for great hunting in northwestern Humboldt County (Pine Forest and Black Rock Ranges) and portions of Washoe and Pershing Counties. Expect good hunting in most of Lander, northern Eureka and western Elko Counties. Additionally, some areas in southern Nevada should have fair to good numbers of birds as a result of improved production.

“The issue with many of these areas is crowding on opening weekend, especially in the Pine Forest Range,” said Shawn Espinosa, biologist with NDOW. “Even though it will be good hunting in this area, there are plenty of other spots that will be productive and we recommend seeking these out during the early portion of the season. The Jackson Mountains showed much improvement from 2008 and there are some remote portions of the Black Rock and Bilk Creek Ranges that will be good with fewer people.”

Although counts appear down in Washoe County, the very hot and dry survey conditions could have altered the sample as a number of birds were observed running on the ground, reluctant to leave the shade and water sources. In central and southern Nevada, brood surveys conducted from the ground as well as general observations indicate good production levels which should lead to fair to good hunting in this region of the state.

Higher populations can be attributed in part to the late spring rains this year, which came with mild temperatures that were ultimately conducive to chick production. Native bunchgrasses and forbs responded well to the ample moisture and provided birds with incredible food resources and nesting cover. This plant growth also produces diverse and increased insect populations, an important food source for newborn chicks.

Wildfires have not adversely impacted additional chukar habitats to date in 2009. However, many traditional chukar hunting areas are still suffering the effects of almost a decade of the worst fire events ever to occur in Nevada. During the period from 1999-2007, approximately 6 million acres of various habitat types burned in Nevada resulting in the establishment of cheatgrass and other invasive non-native weed species across the low to mid-elevations. This has been detrimental to many chukar populations because of the lack of native shrubs that are important for cover, nesting and forage purposes.

Sportsmen can thank the Nevada Chukar Foundation and other sportsmen’s groups for funding aerial surveys, water developments, and habitat improvements aimed at increasing populations of the tough-to-hunt quarry.

“During the early portion of the season, we really stress getting out and walking and not simply driving up and down canyon bottoms along water sources,” Espinosa said. “If conditions are hot and dry during the early portion of the season, chukar will rely heavily on these water sources and young birds especially will be at a disadvantage. Walking rather than jump shooting birds from the pick-up is much more sporting and can provide birds with at least some access to water.”

The Nevada Department of Wildlife (NDOW) protects, restores and manages fish and wildlife, and promotes fishing, hunting, and boating safety. NDOW’s wildlife and habitat conservation efforts are primarily funded by sportsmen’s license and conservation fees and a federal surcharge on hunting and fishing gear. Support wildlife and habitat conservation in Nevada by purchasing a hunting, fishing, or combination license. For more information, visit www.ndow.org.