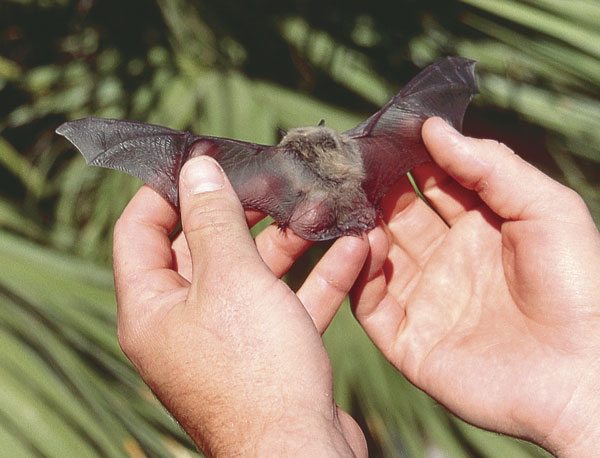 JARBIDGE, Nev. — As part of Jarbidge Bat Blitz, an interagency group of wildlife biologists from the Nevada Bat Working Group, other resource specialists, and volunteers conducted bat surveys and provided logistical support to a mine closure team to build four bat-friendly gated closures on the Jarbidge Ranger District of the Humboldt-Toiyabe National Forest in July. The Nevada Bat Working Group comes together annually to do a project, such as installing a bat gate or surveying bats in a given area in Nevada.

Participants assisted in the bat gate construction at the 4M mine by carrying large construction materials up the steep, mainly switchback road to the mine. A mule named “Willow,” along with handlers Andy Kelher and Nancy Prall, contributed by hauling a large generator, welding tools, and other supplies for the project.

“Katie spent countless hours planning the bat netting sites, and putting together the decontamination kits to prevent the introduction of white-nose syndrome to Nevada.”

Bat gates are multipurpose, especially in such places as Jarbidge, not only to prevent Forest visitors from venturing into dangerous abandoned mines, but to prevent disturbance to bats at critical times when they’re raising their young or hibernating.

During the surveys, eight species of bats were identified with five confirmed breeding species in the Jarbidge area. Radio-telemetry studies were also completed near Merritt Mountain. Radio transmitters were placed on 15 reproductive silver-haired bats. Through the signals of these transmitters, at least two maternity colonies were identified.

“I want to especially thank Katie Miller and Pete Bradley from Nevada Department of Wildlife and the Nevada Bat Working Group for planning and coordinating this event,” said Kyra Walton, northeast zone biologist on the Humboldt-Toiyabe. “Katie spent countless hours planning the bat netting sites, and putting together the decontamination kits to prevent the introduction of white-nose syndrome to Nevada.”

White-nose syndrome is an affliction that has negatively impacted several bat species in the eastern U.S. A fungus grows on the noses, wings, ears, and tails of affected bats. Mortality typically exceeds 90 percent in hibernating colonies in the eastern U.S. White-nose syndrome has not yet been documented in the western U.S., but scientists working on this important issue feel that it is only a matter of time. Consequently, any person working with bats in the state of Nevada are now required to follow a decontamination protocol.

Partners for this project were the Nevada Bat Working Group, Nevada Department of Wildlife (NDOW), Forest Service, Bureau of Land Management, Nevada Natural Heritage Program, and Nevada State Museum. The bat gate partnership between the Forest Service and NDOW has been successful in protecting numerous important bat roosting sites for many years.