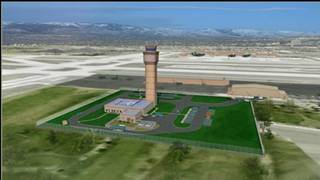 “ I am very impressed with the new tower facility,” Gibbons said. “When it is operational, air travel to and from Reno-Tahoe International Airport will be safer and more efficient.”

The new tower at RTIA is three times the height of the tower presently in use. This new height advantage will provide air traffic controllers with a much better view of the airport and the approach areas around the airport. The new tower will also house new highly upgraded equipment. All this will provide greater safety for the flying public. According to FAA officials, the new tower will likely be ready for use within 6 month to a year. Some equipment is already being moved into the new facility.

“Clearly, this new tower will provide a new measure of safety at Reno-Tahoe International Airport,” Gibbons said, “As a former airline pilot, the level of visibility will improve sightlines for air traffic controllers and the electronic equipment will bring the technology of the tower into the 21st century.”

Governor Gibbons was an enthusiastic supporter of the efforts to fund and build the new control tower while he was a United States Congressman.