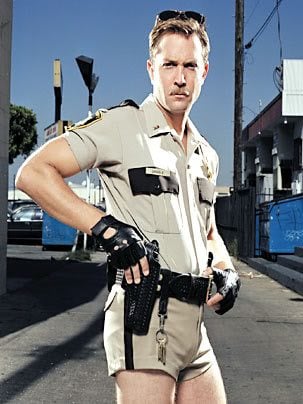 This Is Reno just nabbed an exclusive email interview with Lt. Jim Dangle, of the Reno Sheriff’s Department and the hit documentary series “Reno-911,” about his recent forced retirement from law enforcement.

THIS IS RENO: You announced this week on Twitter that the reality show, Reno-911, has been canceled. Now that you’ve retired from the Reno Sheriff’s Department, what plans do you and your testicles have for the future? Any police work? Consulting for the LAPD?

LT. DANGLE: My balls are actually being donated to the Museum of Television and Radio, where they’ll hang next to Milton Berle’s.

TIR: There was a rumor going around about Reno-911 being filmed in Bakersfield, Calif., but Reno police reports have a strong correlation to actual Reno-911 episodes. Now that the show has been canceled, can you confirm or deny this rumor?

LD: Every episode was shot in Reno, Nevada. Then, when the episode was complete, it would be sent to Peter Jackson’s WETA Digital, in New Zealand, where they would spend several months adding the palm trees to make it look slightly more like Carson, California.

TIR: How come I can’t find the Reno Sheriff’s Department in the Reno phone directory?

TIR: What will you miss most about Reno, besides the palm trees?

LD: There are no palm trees in Reno, those were added in New Zealand, at great expense, as I mentioned.

LD: Yes. When we first named the show “Reno 911!” — I had only been through Reno once, at age 10 or so. I’ve now been several times, and each time I’ve had a blast, and found the people to be extraordinarily friendly. Thanks for leting us borrow your name, and our sincerest apologies to the Reno PD and the Washoe SD for all the flack they’ve probably gotten over it.

TIR: Thanks for the interview. On behalf of This Is Reno, I can say with confidence that you and your balls are welcome back in town anytime.

Opinion: Why RSCVA’s “Save Reno-911” campaign is on the mark