Home > Entertainment > “Die Another Day” Aug. 27: The Movie and the Car
EntertainmentEvents 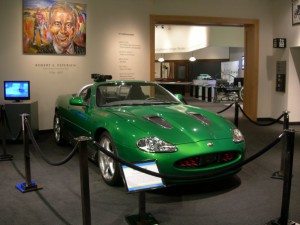 Monthly Movie Night at the National Automobile Museum, the Harrah Collection, in downtown Reno features the James Bond action adventure Die Another Day August 27. See the movie and the spectacular car featured in the movie in a special exhibit.

Die Another Day is the 20th spy film in the James Bond series and the fourth and final to star Pierce Brosnan as the fictional British M16 agent, James Bond.

In the movie, Bond is sent to investigate the connection between a North Korean terrorist and a diamond mogul who is funding the development of an international space weapon.

Thursday Movie Nights at the Museum are scheduled to complement the downtown Riverwalk Art Walks on the last Thursday of each month. Special movie night pricing is $10 and starts at 5:30 p.m. offering plenty of time to see the museum and the 2002 Jaguar XKR, complete with machine gun, featured in “Die Another Day” and included in the Masterpiece Exhibit “Movie Cars: Cinematic Stars on Wheels.” The movie starts at 7 p.m.

Each Movie Night at the Museum either showcases a car in the special exhibit or features a vehicle similar to one in the museum’s collection, at 10 S. Lake St. in downtown Reno. Parking is free in the museum lot.

For more information on the Museum, the special exhibit or the featured movies, visit www.automuseum.org or call 775-333-9300.