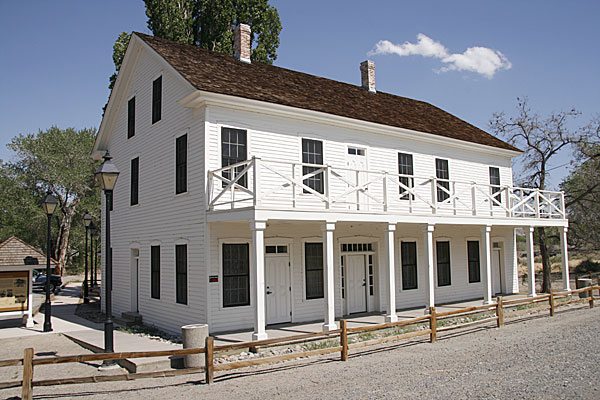 Sam Buckland came west in 1850 to make his fortune in the gold fields of California. Like many miners of the times Sam found earning a living off gold mining was not an easy venture.

He moved back to Nevada in 1858 and in 1859 purchased the land where Buckland Station now sits. Buckland contracted with both the Overland Stage Company and Majors and Wadell’s Pony Express to provide services for both. Buckland also built a toll bridge, operated a tent hotel and sold wholesale groceries, hay and barley.

In 1860 Eliza Prentis arrived at Buckland on a wagon train bound for California. Sam and Eliza struck up a romantic relationship and married later that year. Both

In 870 Fort Churchill was decommissioned and sold to Sam Buckland for $750. Sam took all the salvageable lumber, windows and doors from the building and built the historic two story ‘Buckland Station’ that sits on site today. Both Sam and Eliza Buckland were a vital part of Nevada’s history and as such will be remembered in the Birthday Chautauqua performances.

Parking is free, but limited at Buckland Station; however, additional parking can be found directly across the highway at the Orchard. Seating is limited to approximately 30 people.